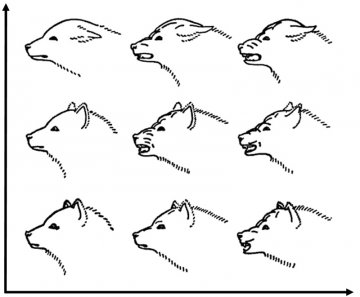 Even though wolves cannot talk, they communicate effectively in many ways. Wolves mainly use body language to convey the rules of the pack in order for it to remain organized. The reproducing pair (dominant male and female) is the leader of the pack and they show it by standing tall with their tails high as a way of communicating dominance.

On the other hand, the less dominant members of the pack exhibit their submissive behavior by lowering their bodies and holding their tails down while pawing at other wolves that rank higher.

Passive submission, on the other hand, is shown when subordinate wolves lay on their back or side exposing the abdomen and the vulnerable side of the chest to the dominant wolves.

Growling and showing of teeth is usually a sign of disagreement between two wolves when they try to look as fierce as possible. In most cases, less dominant wolves give up before fights begin. The submissive wolf rolls over on its back as a sign of acceptance of authority.

The dominant wolf reacts to this behavior by mortal attack (in case of trespass) or tolerance where the dominant wolf stands over the submissive wolf. The dominance rules ensure that the wolves do not hurt each other or fight among themselves.

When angry, wolves bare their teeth and stick their ears straight up. When a wolf becomes suspicious, it squint its eyes and pulls its ears back. Wolves show fear by flattening their ears.

Wolves use their sharp sense of smell for communication in various ways. The often mark their territory with their scent, which typically means spraying their urine on an area. Wolves from other packs know that a territory is already occupied when they smell these scents.

Moreover, pack members can identify a pack mate by the smell of its urine. This is quite useful when pack members become separated and when entering a new territory.

On the other hand, wolves use their urine the scent mark exhausted food caches. Therefore, marking empty food caches ensures that the wolves do not dig or search for food that is not there. The chemical compounds found in urine help a male identify a female.

Wolves have four main categories of vocalizations. These include barking, howling, whimpering and growling. Barking is mainly used as a warning sign. It can show aggression from another pack or other types of danger.

Whimpering may show the willingness of the mother to nurse her young. It can also be a sign of giving up when in a submissive position. Growling is a sign of warning. Wolves may growl to indicate dominance or scare away predators and other intruding wolves. Howling is a form of communication between wolves that are far apart. A defensive howl keeps strangers away and the entire pack together. The defensive howl shows that the pack is ready to stand its ground, defend the young ones and also protect their kill sites. Additionally, a social howl is used to rally together, locate one another, or just for fun.