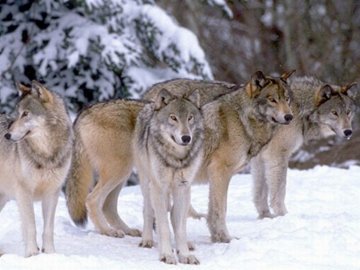 Living in family groups called “packs” makes the wolves a well-organized species with a leader and a hierarchy that defines the role and contribution of each member. In general, these members are actually the offspring of the Alpha male or Alpha pair and each one of them has its own role.

The Alpha male is the only wolf in a pack that has the right to reproduce. Each pack has usually only one female which will give birth to the Alpha’s offspring. His status is earned and maintained trough dominance over the rest of the males.

His social status in the pack is usually maintained trough aggression as it is quite common for the Alpha to fight with other members. He is also the one that will get to feed first during a hunt while the others will need to wait their turn. He only loses this right when his offspring are developed enough to eat raw meat. At that point the Alpha male will leave the pups to eat first.

Beta males are only submissive to the Alpha male. All other wolves are submissive to both the Alpha and the Beta. His role in the pack is to become the new Alpha once the existing one dies, inheriting all his privileges. Beta males will often fight other members of the pack, which is how he proves his dominance and preserves his status.

Subordinates are wolves that are not Alpha, Beta or Omega. They represent the middle class and in most cases, the Subordinates are Omegas that climbed up the ladder by dominating others.

They are usually submissive towards the wolves of upper rank. Occasionally, the subordinates can become the Alpha wolf by fighting their pack leader. They actually skip the Beta position and become the new Alpha.

Omega wolves are at the bottom of the hierarchy. He is the one to feed last and if the Alpha demands it, he will not feed at all. Other members of the pack will often bully them, but the Omega does play an important role in the pack. They help the pack vent off conflicts without acts of war.

Recent studies showed that their contribution goes beyond internal conflict resolution. It seems that packs that lose their Omegas stop hunting and begin mourning them. Within the pack, they can fight their way up the ladder, but their status is earned only by defeating their opponents on multiple occasions until their dominance is recognized.